MissE Posts: 774
March 2018 in General Discussions
In relation to this thread: Recovering Power Scrolls from pets and how difficult it is to get scrolls for pets another issue is this:

Last night I was doing Miasma with my greater beetle (one of only two pets that I actually have 120 tactics and wrestle on, and it unbonded with the the normal text saying 'your beetle decides it doesn't want a master' etc

I had lored the beetle about 2 mins before this happened and it was 'wonderfully happy so I have no idea why it unbonded.  I have 107 natural tame/vet/lore and 13 of each on a ring to take it to 120 skill.  Never had a pet unbond like that before.

What concerned me was firstly that now we are spending millions and millions on scrolls pets should NOT unbond instantly without some kind of message saying that they are unhappy. @Kyronix can we please get some kind of message to say 'your pet is not up to strength as it is hungry' or something similar so that this sort of thing doesn't happen?  It can be done as it says something like that for bane dragons when they need feeding.  While losing a pet was always a disaster, losing a scrolled pet after spending millions gps on it and hours doing the pet training is tragic.  A simple message would  not be game breaking surely?

I dragged miasma off so that I could retame the thing and got it out of the labyrinth and found much to my horror that all the training I had done on it was pretty much destroyed.  It had been maxed on ALL skills, now it is: 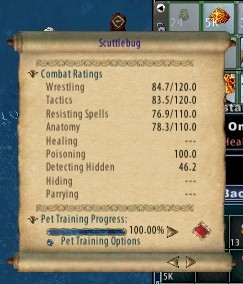 Has this changed?  Last time I retamed an unbonded pet, years ago, it lost about 2-3 points in trained skill not 30% or more.  I mean ok, that is like hours and hours and hours of work to redo over an unexplainable game mechanic that allows a pet to go from wonderfully happy to unbonding in the  space of 2 mins.

Not a very happy tamer this morning at all.