Yoshi Posts: 1,266
December 2021 edited December 2021 in Bugs
"Hadn't logged in for a few days, logged in on my tamer at the bottom of Hythloth dungeon dead, my triton appeared next to me, think it was dead can't tell in black and white, (think that is a little odd in itself, maybe my char was still logged in on server down or something last time i was logged in, i was afk farming)
I left the dungeon, ofcourse triton did not follow me while i'm dead, got ressed, went to my house, logged out/in triton did not appear, had 0 followers, used pet ball of summoning, did not appear, searched the area of Hythloth where i saw it last, used a mooring line on a ship, went to thing that autostables pets in britain...
Called a GM, a GM could not locate.
(GM did not have up to date patch information:) 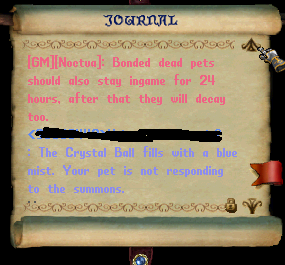 This was nothing i hadn't done scores of times before"
Posts on this account have been pre filtered from personal comment or opinion in an effort to suppress conservative views in order to protect the reader.
Untitled.png 47.2K