I use on Melee fighter.  It Chooses Whirlwind Then picks the target and adds counter attack.  Instead of Counter Attack I have Evasion on another melee warrior so I spam that over and over.  You can put these is different order.

Works great to spam a special every hit.

This has been working great in Deceit. Out of hours of play it has only got me killed a few times when it decides to choose a mob not in your range.  So, watch your toon fight and if he is just standing there pick a target in range.  (ill put a pic at end.)

Archer Thrower version.  Mine is an Archer/Bard.  this works great on individual targets.  In Deceit the mob is usually dead before you can discord it.

If pet is in range it will apply bandages and then cast a Greater heal on the pet.  can bring your pet to full HP very fast.

Here is the targeting choosing the wrong target.  I am standing on 2 mobs, but it chose the one around the corner.  I noticed I was just standing there, so I pushed the button again.

But as I said I have had just a few deaths from targeting not working, lots better than trying to click stuff. 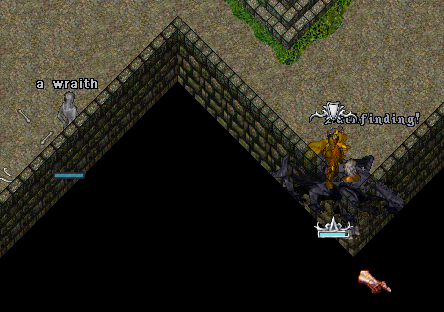 Credit to whoever came up with these Macros, it was not me.  Thanks