Treasures of The ArchLich Deceit Dungeon

This is a Tram Only Guide, Players in Fel will be at the spawn if available.

Deceit has 4 levels.  the Spots I have labeled for a mob means: That type of mob will spawn there.
Other random mobs will spawn everywhere but the labeled ones will spawn definitely.

It looks like they have added Spectral Swords again.

Deceit is not like the other dungeon events, all type killing templates can find places to get drops.

Mark Runes now.  I only mark the entries and exits. The floors are not that big, it takes a few second to run from end to end.

Basic low level undeads. This is a good place for new and returning players to fight.

Most every mob can poison you, bring Orange Petals if not in Vamp form.  Use one of the anti steal statues.  The mobs will loot you.  Or carry an unopened  Paragon chest, they love to loot junk from those first.

The cells are good for casting or archer/throwers. Things will be behind walls, You can use area spells to kill them, Earthquake or Thunderstorm.  A fast caster can kill mobs faster than melee toons can run up to them.

Many players will drag the Paragons to the entry, so you should have a marked rune inside, away from that entry. 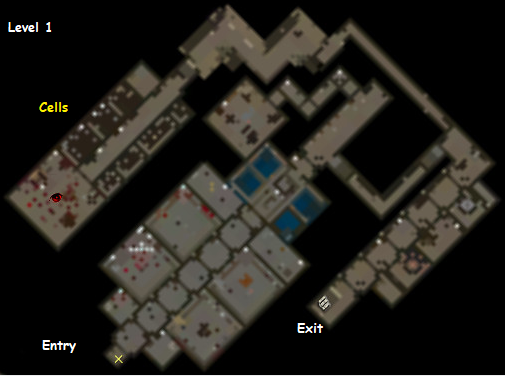 More low level undeads.  They progressively increase in difficulty to the exit.
Lots of doors at the beginning. Have your open door macro made. Must face the door for it to open.
Lots of rooms that the area spells EQ and Thunderstorm will go into.  A couple of rooms to put annoying Paragons in. 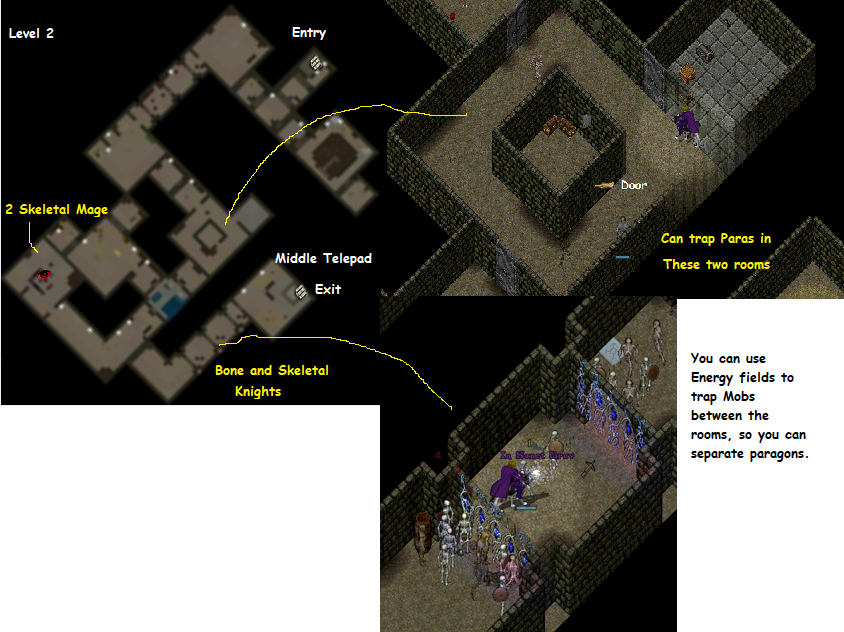 The Liches and Poison Ele are added here. Casters can do well, the normal Liches and PEs die with a flamestrike. Also there are rooms you can run into and area spell.  This is where Melee starts working better. 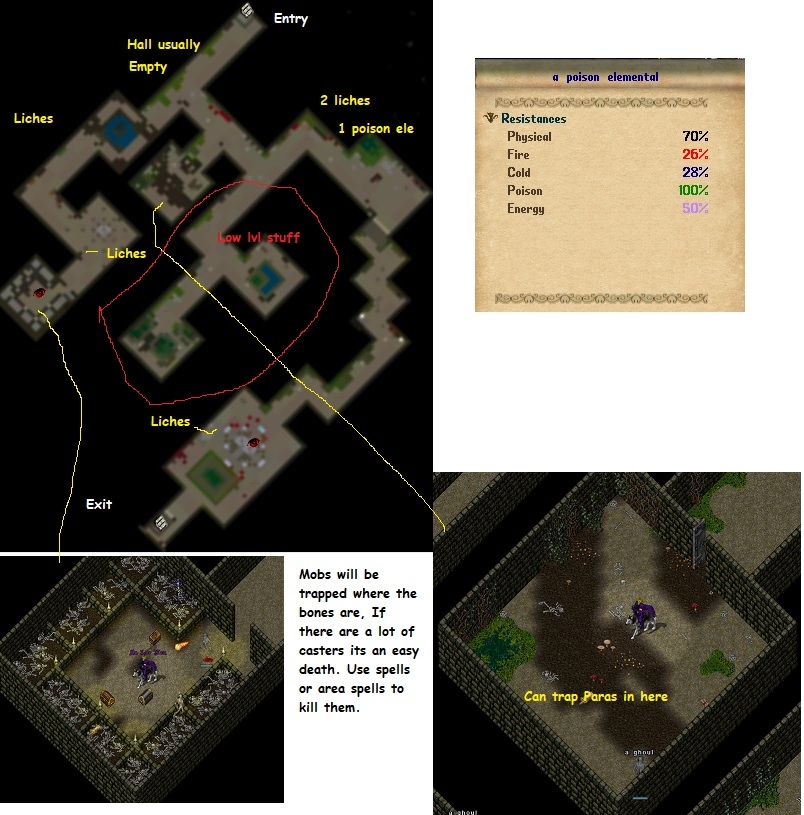 I think that hidden door is locked on some shards, you can mark a rune on each side. The hall to the Ram room is not a normal spawn area. So you can recall into the hall. 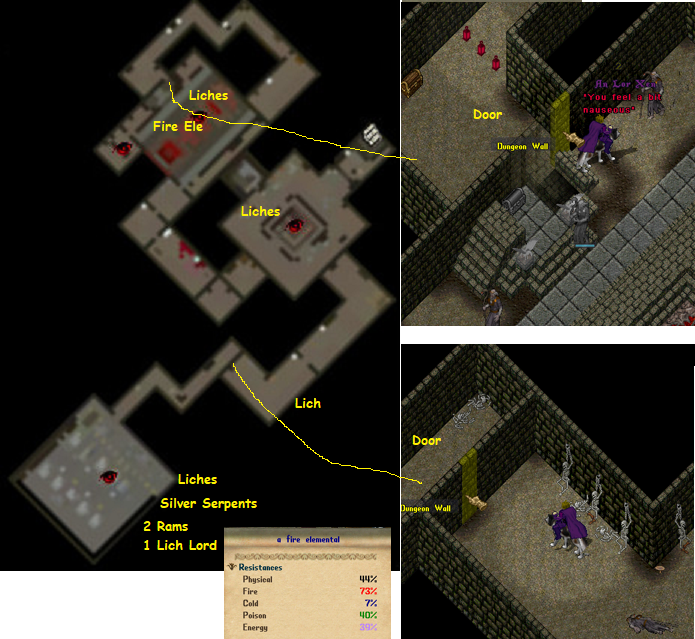 The Ram room can be fun and get you drops.

You can drag Paragons out to the hall and close the door, Like I took the LL and a ram out for this picture.

That platform is uneven and has some buggy spots where you or a Mob can stand and not be in line of sight.  You will fall off the platform if you get too close to the edge.

There can be a crowd of mobs and they have high fame.  You can get stuck on the chests and objects in the main area. Sometimes a chest will spawn right where you wanted to go.

Better to lead the Paragons out to the hall and fight them there.  The LL and rams take a while to kill. 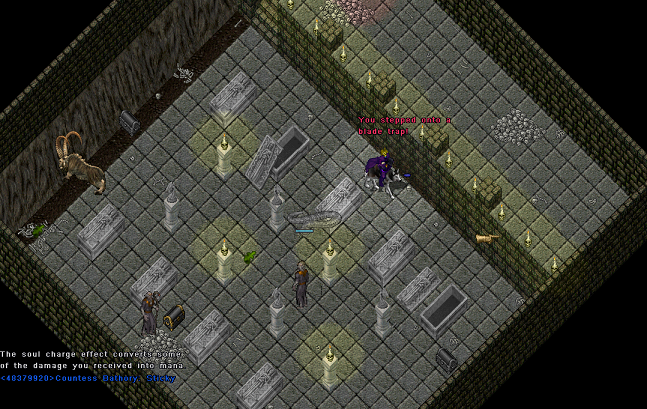 Most of the Mobs are Undead, so an Undead slayer is quite useful.

Most mobs are lowest in Fire resist.

So for weapons a Fire weapon with an Undead Slayer.

The Liches and Lich Lords will kill plenty of adventurers.  A Fire damage Undead weapon will help you slay them faster.  LL can take a while.

The Poison Elemental paragons have high HP. An elemental slayer using Fire or Cold damage is best. But they are low in fire also.  These take a while to kill.

The Fire Elementals are not lowest in Fire.  But the paragons are not that difficult. I just kept my Fire weapon on.  Cast energy spells on them.

Silver Serpents are low in all resists but Phy and Poison. They do not have very high HP in Paragon form.
I did not use a slayer.

The Rams  have the Highest HP of the normal Mobs in Deceit.
Rams do not have a slayer, but they are also lowest in Fire resist.
You want a fire weapon with AI or DS.

The Spectral Swords have no slayer, the paragons have high HP. They must have very high resists in all. It is best to not kill them so they do not make Paragons.  They take forever to kill and must have very little fame. Pound on them with AI or DS for ever till they die.

So Fire damage Undead Slayer is the most useful weapon.

A cold damage Elemental Slayer for the Eles.

A Cold Elemental slayer for the Paragon Poison Eles.  So they wont take so long.


Good Luck and Have Fun!