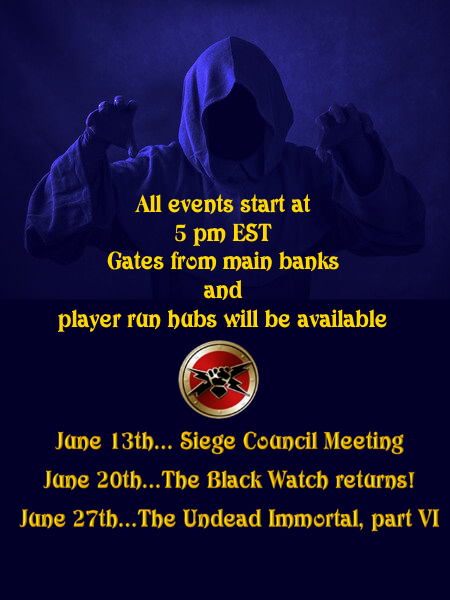 So, for newcomers to Siege, what is the Black Watch?
Here's a little history:

Under Lord British, the King’s Guard was known as the Order of the Silver Serpent. This order still exists, and the various guards you may see, or may call for in distress, are members of it.
However, there was once a special division of the King’s Guard – a group of elite guardsmen – who feared nothing, and dared much. Renowned across Britannia, they noted with interest the depths of the Great Stygian Abyss, and as they heard the tales of conflict told by the Gargoyle Queen’s own royal guard, they grew determined that this place of darkness would know the light of Virtue.
And so, they travelled to the Stygian Abyss, with every intent to bring the Virtues to the denizens of that dark place. Their time there was harsh, but their adherence to the Virtues gave them the strength and ability to survive, and even to thrive there. For an age they toiled against the darkness, utterly intolerant of all who would serve Chaos and Disorder. Their experiences in the Abyss served to enforce their beliefs, and it is that experience that they ultimately brought back to the lands of Britannia.
These guardsmen are bastions of Order, Light and the Goodness with the primary goal of protecting and maintaining order in the lands of Britannia and Sosaria as a whole.
Upon returning from the Abyss, they found that the former proponent of Chaos, Lord Blackthorn, now reigned as King. These noble men and women pledged to serve the King as his Royal Guard and assumed the name of “Blackthorn’s Watch”. The citizens tend to prefer to call them “The Black Watch”, with many great debates in taverns as to whether this means that they watch over King Blackthorn’s safety, or rather observe the king, with an eye to guiding the Kingdom towards Order, and overthrowing Chaos once and for all.

I will be trying to have regular Black Watch events again. They sort-of fizzled out a while ago, and, rather than try to piece together who should have which rank, I am putting together a new ranking system, which I think you'll like. Think of it as a promotion to the elite guard - you're not starting from scratch, you're starting in your new rank, as a member of an elite combat unit.

Roll call will be taken at all Black Watch events from now on. That is simply to make it easier for me to keep track of who attends, which helps you with promotions. In order to gain points from being at such an event, you need to have been present for roll call.

New sashes will be given out once I've finished getting the new system worked out and published.
All good? See you on the battlefield!