After the last patch, the text shifted in both my Davies Locker gumps. But, others using the same client don't see it in their lockers (or didn't look and just pretended to)

Expected: The way the lines are set up, there are false "dividers" created by the structures of the grid that indicate the column sides.
What I'm getting: 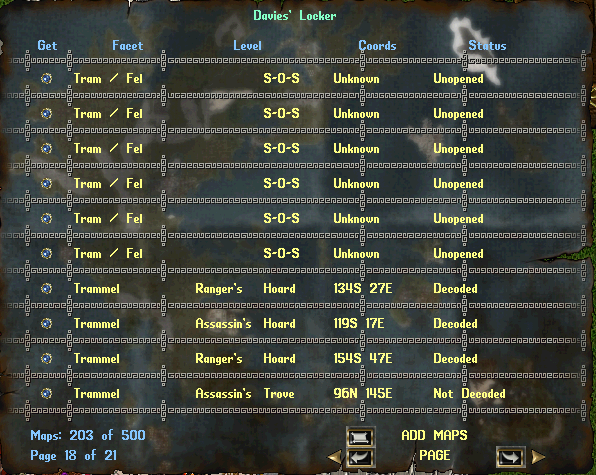 Today, I had almost all of my maps shift from Decoded to "Not Decoded". Only the three Hoards in the screencap, out of 21 Hoard maps, did not reset.

This includes 15 in my locker, and 3 IN MY PACK (all for the Tram Trinsic Jungle region around the entrance to the Delucia passage), that I had opened and read several times yesterday (after removing them from my locker, 2 nights ago). I had to open those three repeatedly yesterday to resort them in my pack, as they popped to the top level of my pack (stacked) each time I died doing the other maps I'd removed at the same time. And, of the 15 in the locker, I'd pulled them from the locker, opened them, and resorted them THREE TIMES in the last 4 weeks (once just for general sorting into NW, NE, SW, SE, then JUST LAST WEEK sorting them further by geographic location (by island, or area of the mainland), and one more time when consolidating (I had gotten more Trove maps and MIBs, and pulled the maps so as to get all the MIB together, Hoard maps together, and Trove maps together).

Maps, according to everything said when the ability to reset was added (and ever since) were ONLY supposed to reset after 30 days, if left in a locker or container and REMAINED UNREAD. NONE of these maps had gone unread for 30 days, nor had they remained in the same container uninterrupted for that long, but all were reset.

Now, after completing about 80 out of 100 Hoard maps (plus Hoard maps I did right after getting them off guardians, because I'd already cleared the areas they were located), I'm going to have to resort what I have left, and the reset means that they've reset to all over the facet, after I'd worked down to where I only had maps left in the Trinsic Jungle area.
locker bug.png 208.6K