Violet Posts: 355
November 2018 in Test Center
I'm sorry in advance this is lengthy, what can I say, I really like animal taming. @Kyronix @Bleak

I love the idea of a new tameable.  So please don't think of me as ungrateful. However, I think the Frost Drake could be better, unless the intent is to make just a show off pet.  As it stands right now there is no reason to use this drake over several other currently spawning animals other than a limited bling factor.  I like every animal to have a purpose though and lead a fulfilling life going on adventures with it's human companion.

Max intensity is the full points a 0% to 100% spawned-range fully trained pet would get: all attributes, base damage, scrolls, special abilities, moves and aoe. if there is intensity to just having a skill, which we believe there might be, we do not include that, we also understand a majority of animals fall into the 20-80% range of the spawn values.

Frost Drakes (from the 20+ we were able to lore thus far on TC1) seem to follow the crimson/platinum drake model regarding attributes.  They deviate in regards to resists ranges, damage spread and special moves/abilities:
Now we will look at a couple currently available in game animals:

With the exception of the removal of dragon breath, the frost drake ends up being worse than any other animal in it's damage class.  It's low intensity doesnt have the benefit of Crimson/Platinum Drakes 100% cold damage. It has the split damage type but no intensity increase or overcapped stats to make it desirable like the Cold Drake might be to some, or increased intensity and ability to be ridden and heal like the Cu Sidhe. It also has cold wind which makes it less desirable than a white wyrm with no innates other than magery.

What are some changes that could make the Crimson Drake a more viable alternative but still keep it in balance?

or
Either of these changes make the frost drake more viable to use as a pet but not to the point of making them more powerful than anything currently spawning.

It could also be given higher starting attributes as it's at the low end of the 2 slot pet spectrum.  A perfect 2 slot Frost Drake would spawn at 3150 while the 2 slot pet cap is around 4255, low end is around 2705. Tigers, which are incapable of having true magics have a 2 slot intensity range of 3511-4255.  Sabretooths 3270-3626. Both ranges are above the spawn range of the Frost Drake.

Another suggestion while I am at it:

Frost Stallion
Why, there is already a Cold Damage rideable pet, the Cu Sidhe?
Why would it not be overpowered? 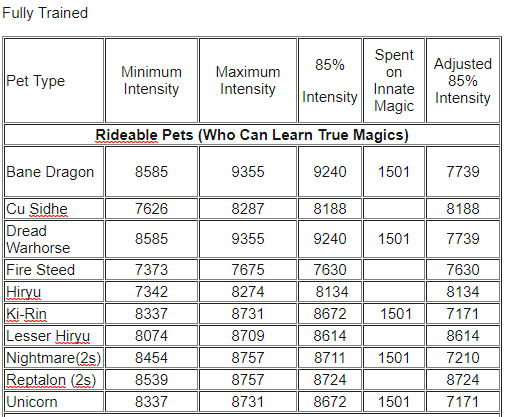 If you are still with me after all of that, I thank you for your time and consideration.