Pet doubles at Navrey and after dismounted the first pet vanishes

Trismegistos Posts: 163
April 23 in Bugs
When a pet was attacked and or killed by Navrey, the web shooting effect doubles a pet even it was mounted during this effect.
While the first pet was mounted a second one was thrown away by Navrey. The pet comes then back to its owner. When ridden pet is dismounted the former first pet vanishes.
This happens to fighting pets and also to pets like Happy anniversary horse which dies and was resurrected and ridden by its owner. In this case a second dead horses comes to its owner and same thing happened. If ridden horse is dismounted it vanishes. 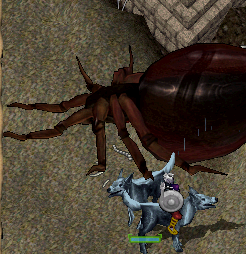