RAID ON SECRET HIDEOUT OF THE FAMILY

Tanilia Elnorin lead a raid on the Family’s hideout in Serpent’s Hold. She was in search of a farmer known as Sudos who was responsible for 1 or more murders. The raid was quite successful, Sudos was killed, important information on the family was discovered and Moreno was wounded in the process. Moreno did escape but King Blackthorn believes the raid was successful and managed to cut deep into the family mob. He is confident the family will be eliminated in the near future. Not everyone agrees with his assessment.

Possible family member believed to be working for Moreno 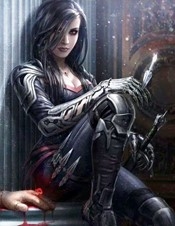 Suka is dangerous. She is reported to be quite insane.

She is not loyal to Brittania rule and has little to no use for King Blackthorn.

Death Threat: After reporting a possible family member to the King and Governors, Idril discovered a parchment in the Yew Town Hall mailbox that contained a threat against her life. Idril did not take it seriously.

The meeting took place on February 24 @ 8:00 pm est. King Blackthorn report Tanila’s raid was very successful. She uncovered much important information about the Family and believes the family has been weakened significantly. Tanilia was able to recover the stolen armor of her deceased love, Lord Ivasaar. Most of the Governors report things being fairly quiet in their towns. They are all keeping watchful eyes out for signs of the family.

Of note, Jhelom Governor Frey reported his governorship was being challenged by a group who calls themselves the Noblists. They do not believe anyone who is not of noble birth should hold office or position of power within the realm.

It appears the Trinsic Paladins were moving the prisoners, from the attack on the family hideout in Serpent’s Hold, through the jungle to Trinsic. However, Moreno and his gang attacked and freed the prisoners. Moreno recovered a number of important documents during the attack. They returned to their temporary camp in Minoc and started to review the documents.  Governor Anne Nomilly caught them, took names, and told Moreno he was not welcome in Minoc. Suka added Governor Nomilly to her death threat list.

Spring marks 4 years of courting, will the lovely couple have an announcement soon?

A renown pirate appears to be off the seas, a baby is on the way

King Blackthorn appears to have lost the respect of several town leaders. They report he is not listening to them, again, and continues to make the same mistakes over and over. They also report he gets details confused and are concerned. Is a rebellion in the future?

Phoebe Nox’s home in the Fen appears to have been burnt out? Now who would have done something like that?

In an attempt to understand the various cultures of Sosaria, an Orc named Skrug was asked to provide us with his perspective …

An Orc’s experience of a tavern night.

Of Cider an’ humies (an orcish account of human behaviour)

De smell of meat, an de vile tings dat humies use to “seezun” der meat filled me snout as me got off me howler.  Me saddle creaked as me dismounted.  Me remember sniffin’ de air.  Trinsuk alweys smell nubhosh.  Too meni tin can humies stinkin’ up de place.

De humies arrival always am wif words like “Ew, it stinks in here, orc.” Or sumtin like dat.  Dis moon was same.  Then they drink, an’ it nub matter anymore.  Nub sure how dem even smell Skrug, when dems “seezuning” stink de whole place ub!

If you have a place of interest in your town or an event you would like showcased, please contact Idril Eladar.